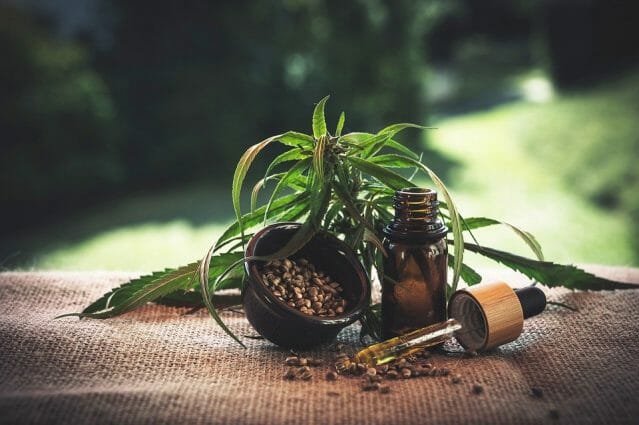 Cannabidiol or CBD is a prevalent component in marijuana (cannabis). It is the second most active component in cannabis and can be derived directly from the hemp plant. Although it is one of the most active ingredients, it is not enough in itself to cause a “high” when taken alone. The feeling of highness is usually caused by tetrahydrocannabinol or THC, which is another one of the about 120 components contained in cannabis.

Thanks to the Farm Bill of 2018 signed by President Donald Trump of the United States of America, hemp and hemp products can now be legally manufactured and sold in states of the US. However, not all hemp-derived cannabidiol products can be legally manufactured and sold. Cannabidiol can only be sold in cosmetic products if it has less than 0.3% THC, and it must be clearly stated. Other than that, it cannot be added to therapeutic products, food and dietary supplements.

However, cannabidiol can be used legally in the treatment of various kinds of pain, anxiety, muscle disorders, Crohn disease and Parkinson disease. In this article, we aim to study the use of cannabidiol to deal with pain by understanding the concept of pain in the body and studying how CBD works to combat pain.

How do You Feel Pain?

Scientists agree that there are various flavors of pain, but the four most common flavors are: neuropathic, nociceptive, psychogenic and nociplastic pain.

Neuropathic pain is caused by an inflammation of the nerves or any damage to the nerve. It is also called nerve pain, because it occurs when fibers in the nerve are damaged. Examples of this kind of pain include the pain caused by diabetes.

Nociceptive or acute pain is caused by tissue damage, such as a bone injury or arthritis.

Psychogenic pain is caused by emotions like depression and anxiety, which can also add to existing pains and make them much worse.

Understanding the kind of pain that is being dealt with is key to knowing if cannabidiol is the right remedy for that pain. For many, this may not be the right option. Also, these pains respond to medications differently, meaning a deeper understanding of how CBD works is key to determining how to use it to solve the set problem.

How Does Cannabidiol Work?

Thanks to the 1980 research funded by then President Ronald Reagan, the endocannabinoid system was discovered in the body. The endocannabinoid system or ECS is a system that is made up of a complex network of cell receptors, as well as neurotransmitters. This intricate network system is responsible for interacting with CBD when they enter the body, stimulating the ECS to produce its own cannabidoids.

The ECS is responsible for maintaining a level of homeostasis in the body, and for controlling biological functions such as sleep, mood, temperature control, fertility, memory and appetite. It is also responsible for control of pain and the feeling of pleasure, which is what is affected when CBD interacts with it. In other words, when CBD interacts with the ECS, the ECS is stimulated to release its own cannabinoids to help restore your perception of pleasure and ease the pain.

Not enough is known on how CBD really operates in the body to restore the state of being, and the burden of that research leans on the shoulders of well-meaning scientists who wish to bring the public to a full knowledge of how CBD is important in dealing with mental and physical pain.

What We Currently Know About CBD and Pain Relief

Prior to the signing of the Farm Bill of 2018 that legalized marijuana and hemp, CBD was labeled a Schedule I drug, meaning it was illegal. This label made it extremely difficult for studies to be carried out, and for that reason, very little was known about this powerful component. Now that the substance has been legalized, we now know a little more about it.

Studies have shown that the use of CBD in animals has some analgesic effect and is anti-inflammatory. This means it has been able to deal with some of the inflammation pain (neuropathic) and pain caused by damage to tissues (nociceptive). However, not much is known on how this works for humans.

Scientists have focused more on using a combination of CBD and THC to deal with pain that using them alone. According to a research investigator in the department of anesthesiology and the Chronic Pain and Fatigue Research Center at the University of Michigan, Kevin Boehnke, Ph.D., taking both compounds together gives you a better tolerance to the intoxicating effect of THC and helps you reduce the side effects of both drugs. According to him, taking both drugs together is better than taking them separately or alone, and only when taken together do you begin to see the analgesic effects of CBD.

Till now, there are still conflicting evidences as regards the capability of CBD to help ease neuropathic pain. One study from the Department of Veterans Affairs clearly shows that there is little or no evidence to prove that the THC and CBD combination can help deal with neuropathic pain; while another done by the National Academies of Sciences, Engineering and Medicine (NASEM) shows enough evidence to back the ability of CBD to treat pain.

While many researchers and scientists are hopeful to find enough evidence to validate the use of cannabidiol to cure neuropathic and other types of pain, more research is needed to clear the air and decipher the reasons behind conflicting results in past experiments.

Many of the above-mentioned studies were done with a small group of people in a short period of time, so there isn’t enough data to support the authority of the results gotten from these studies. Boehnke explains that these studies had their limitations by not intricately studying the pain phenotype of their subjects, and not using the right representation of the cannabis products present today.

A lot of these short-handed research can be blamed on the stronghold the Drug Enforcement Agency (DEA) has on cannabis, making it difficult for more extensive studies to be done and published. Hopefully soon, when the stronghold is released a little bit, we can do more research and get more understanding on how to use it in a way that is representative of how people use cannabis products.

As we look forward to the day where we would get a clearer understanding of how to use medical marijuana for our pain needs, we cannot deny the power of CBD and other cannabis products to do a lot of good in fighting pain and other related issues.

As professionals in CBD products, we wish to offer you a chance to see firsthand the good effect CBD can have on your wellbeing, and that is why we are offering you the best CBD products in the market in our stores. Keep in mind that CBD is completely legal, and the DEA wouldn’t have made it so if they thought it was unnecessarily harmful to human health.

Visit our stores today and get the best CBD products for the best prices available in the market.